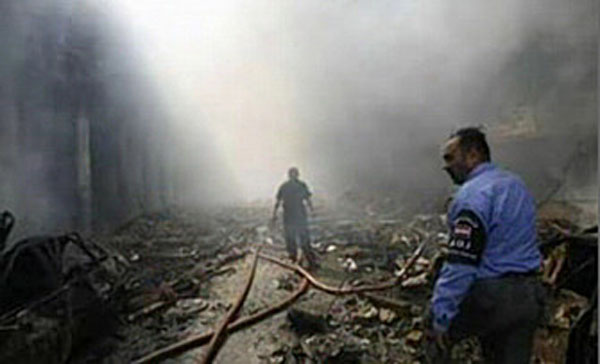 In March 5th 2007, a car bomb was exploded on al-Mutanabbi Street in Baghdad. Al-Mutanabbi Street is in a mixed Shia-Sunni area. More than 30 people were killed and more than 100 were wounded. Al-Mutanabbi Street, the historic center of Baghdad bookselling, holds bookstores and outdoor bookstalls, cafes, stationery shops, and even tea and tobacco shops. It has been the heart and soul of the Baghdad literary and intellectual community.

Book artists represent what is intangible between the pages of any book they create, the interior space that they enter, and from which they slowly fashion a book brings to the visible world the myriad emotions of any text, be it their own, or someone else’s.

The coalition asks each Book Artist who joins the project to complete three books (or other paper material) in the course of a year, books that reflect both the strength and fragility of books, but also show the endurance of the ideas within them. We seek constructions of all the various vessels of the printed word, ones that pay homage to the truth that can rest between any two covers. We are looking for work that reflects both the targeted attack on this “street of the booksellers” as well as the ultimate futility of those who try to erase thought.

The inventory of al-Mutanabbi Street was as diverse as the Iraqi population, including literature of both Iraq and the Middle East, history, political theory, popular novels, scholarly works, religious tracts, technical books, poetry, mysteries; even stationery and blank school notebooks could be purchased on this street, as well as children’s books, comics, and magazines. Arabic was of course the predominate language but books in Farsi, French, German, and English were also represented. Because books have their own journeys, ones quite unknown to us, I imagine there were a few books in Chinese, Japanese, Korean, Dutch, or Italian, as well as classic Greek and Latin, Hindi, or even Russian. Your own text for this project can reflect the multiplicity of this linguistic crossroads.

This project is both a lament and a commemoration of the singular power of words. We ask that the work move within these parameters. We hope the books created will use al-Mutanabbi and its printers, writers, booksellers, and readers, as a touchstone. We hope that these books will make visible the literary bridge that connects us, made of words and images that move back and forth between the readers in Iraq and ourselves. These books will show the commonality of al-Mutanabbi Street with any street, anywhere, that holds a bookstore or cultural institution.

And that this attack (part of a long history of attacking the printed word) was an attack on us all.

The Al-Mutanabbi Street Coalition is not an anti-war project, nor is it a healing project. The coalition feels that until we truly see what happened on this one winding street of booksellers and readers, on this one day in Baghdad, until we understand all the implications of an attack on the printed word and its writers, printers, booksellers and readers, until we see that this is our street, until then, we cannot truly move forward.