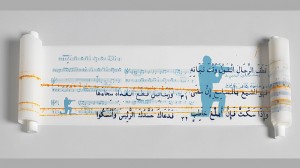 Al-Mutanabbi Street Starts Here assembles artists’ responses to the tragic loss of a cultural and intellectual hub in Baghdad that occurred in March 5, 2007, by a bomb explosion. This important and timely exhibition will be held in five New York City cultural venues from July 10 to September 21, 2013.

The Center for Book Arts will be presenting the exhibition, in collaboration with Alwan for the Arts, Columbia University Libraries, International Print Center New York, and Poets House. This major traveling exhibition, which will feature approximately 250 artists’ books and 50 broadside (prints) by artists from around the world, was co-organized by Beau Beausoleil, Founder of the Al-Mutanabbi Street Coalition, and Sarah Bodman, Senior Research Fellow at the Center for Fine Print Research in Bristol, UK.
A comprehensive catalogue accompanies the exhibition.

This entry was posted in Important and tagged Al-Mutanabbi Street, Artists Book in USA, Artists books, The Center for Books Arts. Bookmark the permalink.