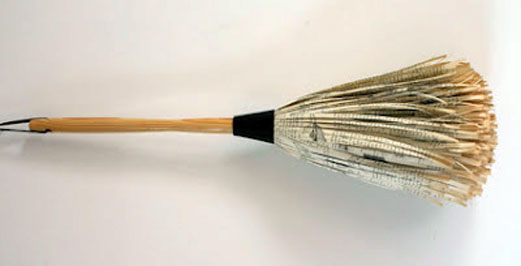 The first showing of the ‘Bound’ exhibition took place as part of Divided We Fall in August 2012. It was a huge success, and the international collective will continue to tour the show over the coming months as a way of strengthening connections within the group and promoting the book as an artistic medium.

‘Bound’ was conceived in late 2011 and gathered momentum via the Artist Book Collective Facebook group, which was established in 2008 by Louise Atkinson, and has exhibited hundreds of artists from all over the world in the intervening years. This latest exhibition brings together twenty-five artists from the United Kingdom, USA, and Australia in a touring show which explores and investigates experimental binding techniques and conceptual interpretations of the book art medium.

The artists involved in the exhibition include Alice Bradshaw, Jonathan, Gann, and Louise Tett – all three of whom incorporate found pages into their work in order to produce dramatically different pieces of art. These range from a 19th century encyclopaedia of birds reconstituted as a feather duster, through to intricate and poignantly crafted wedding bands. Debi Holbrook and Heather Matthew explore a more practical interpretation of binding by literally sewing the books together, so they are unable to be opened. In addition to these, a more extreme version of this idea has been developed by Jane Grisewood, whose piece consists of bound canvas pages dipped into wax.

Every piece of artwork in the exhibition has a strong sculptural presence. This particularly is exemplified by the work of Jane Kenington, whose work references the book as a locus of rite and religious experience, by wrapping it in the style of a To’o figure – a fetish used in ritual worship of Polynesian Gods.

The range of techniques and media employed within the show incorporates screen printing, etching, blackwork, embossing, collage, assemblage and found objects, to name a few, and highlights the diversity of the medium and the artists in the collective. ‘Bound’ is the first stage in creating a permanent artist book archive for the Artist Book Collective in Leeds city centre. This will also be digitised online for the artists, researchers and members of the public to view. Works are also available for sale or commission.