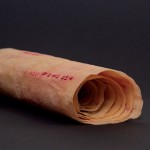 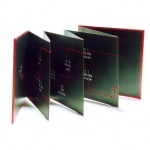 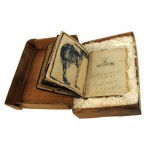 Organiser of the Exhibition: Circle “Bokartas”.

In 2003 the 3rd International Artist‘s Book Triennial took place in the Contemporary Art Centre in Vilnius. 262 artists from 44 countries have send over 1000 exhibits. 118 works from 37 countries where selected for the exhibition. To the opening of the triennial 20 artists from Europe, Australia, America were present. At the time of the exhibition a lecture – symposium and a few day trips around Lithuania were organized.

In May 2004 the exhibition was presented in an “Frankfurt Art” international fair in Germany and in October it was exhibited in Lille, France. The third Artist‘s Book Triennial was part of the project “Lille – European Capital of Culture” project.

The theme of the 3rd Triennial was “23 Sins”. I have got many questions, like – “can I participate in the exhibition if I‘m not a believer?”, “what do these 23 sins mean, if I know only seven, eight or eleven sins?”… Maybe it would be possible to relate number 23 with the year 2003 if we just erased two zeros between 2 and 3, or if we paid our attention that it is the 3rd Triennial.

But everything is more simple (simpler): 23 sins is only one of the apt provocations, which made artists ventilate the existing problems, made them go deeper into the falls of their own and those of the society.

The apt provocation is testified by the texts of two artists in the exhibition catalogue. The first text by Rasa is entitled – “Occurrence”: “Once upon a time there lived an artist and a book. They liked to make 23 sins a day. Finally they got married and became an Artist‘s Book. While the 23 sins have moved to another apartment, because their nerves couldn‘t keep up anymore.”

The second text by Rimvydas – “The text is so so. It is about a sin which needs to be condemned the most.”: “Being half asleep Aushra has marked a page of a boring book with a piece of sausage. Tomorrow (again before falling asleep) she will pull it out again from under the pile of dead roses. What a disaster. According to me such disrespect to a nibbled love romance is truly unforgivable. Not only the ones who are not taking care of the appearance of a book, but also the ones who are not paying any attention to the book shelves are making a very big sin. All serious libraries are taking care of the publishing of beautiful postcards. In these you can CLEARLY see that the arrangement of the books is not a plunge of a bear in the North, but a very important and deserving a big kiss thing. A fight for beauty on the book shelf is sacred.”